Monoaminergic neurotransmitter as an immediate target of current antidepressant medications.
Monoaminergic neurotransmitters including serotonin, norepinephrine, and dopamine, has been closely associated with mood regulation, and thus has been targeted in development of antidepressant drugs. Each neurotransmitter is synthesized by small neuronal subtype in the brain stem area. Those mono-aminergic neurons project its axonal terminals throughout the forebrains. Upon secreted into the synaptic cleft, each neurotransmitter executes its physiological roles via the cognate surface receptor both in the post and the presynaptic density.
The most widely used class of antidepressant SSRI (Selective Serotonin Reuptake Inhibitor) or SNRI (Serotonin-Norepinephrine Reuptake Inhibitor) block those monoamine transporters to elevate the synaptic level of those neurotransmitters. Those antidepressants in clinical use enhance either singly, or in combination, serotonergic, noradrenergic, and, to a lesser extent, dopaminergic neurotransmission.
Delayed therapeutic effect of the current antidepressant medication
An enigmatic fact of the current antidepressant medication is its therapeutic delay. Despite its immediate action on increase of serotonin level, the SSRI (selective serotonin reuptake inhibitor) generally take several weeks to display significant therapeutic benefits, in spite of their immediate effect on serotonergic neurotransmission. This therapeutic delay of SSRI medication have suggested importance of slow adaptive changes in neural circuits over prolonged period of drug treatment, possibly via gene regulation and protein translation. However, our knowledge of the molecular mechanisms, underlying therapeutic responses to long-term treatment with SSRIs is yet to be established at the level of key molecules, neuronal cell types, and neural circuitry.

p11/AnxA2 complex as a mediator of antidepressant actions.

A direct link has been established between reduced levels of p11 (S100a10) and increased depressive- and anxiety- like states in both rodents and humans. Detailed characterization of p11 function has revealed its strategic cell type-specific expression in brain regions relevant for depression, such as the hippocampus, prefrontal cortex, and nucleus accumbens, and that it is required for antidepressant effects. Hence it is likely that p11 function in these neuronal networks is critical for the observed structural and functional alterations that underlie behavioral improvement. Our recent studies show that p11, along with its interaction partner Annexin A2, forms a complex with the chromatin remodeling factor SMARCA3 in specific inter-neuronal populations (mossy and basket cells) in the hippocampus, and may mediate the beneficial effects of selective serotonin reuptake inhibitor (SSRI) antidepressants. Most importantly, our experiments demonstrated that such behavioral improvement is abolished in mice with a constitutive knockout of p11 or SMARCA3 genes. Thus p11 may strengthen neuronal plasticity in the hippocampus after antidepressant treatment via its interactions with SMARCA3. 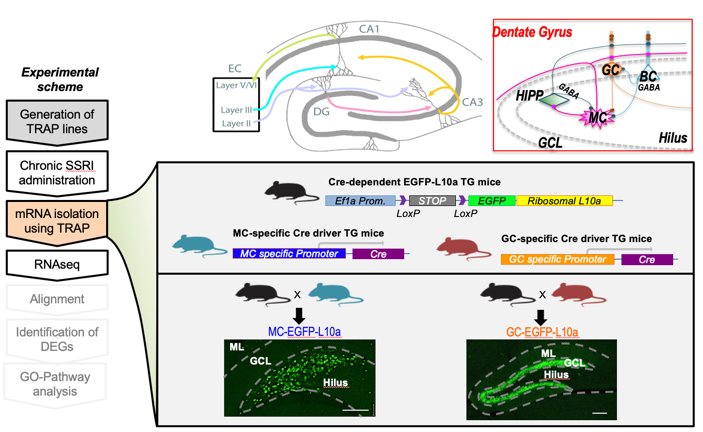 2. Molecular basis underlying neuroadaptive changes for major depression and its reversal by antidepressants

3. Genomic anatomy to understand functional heterogeneity of a neuronal cell type in normal and pathological conditions. 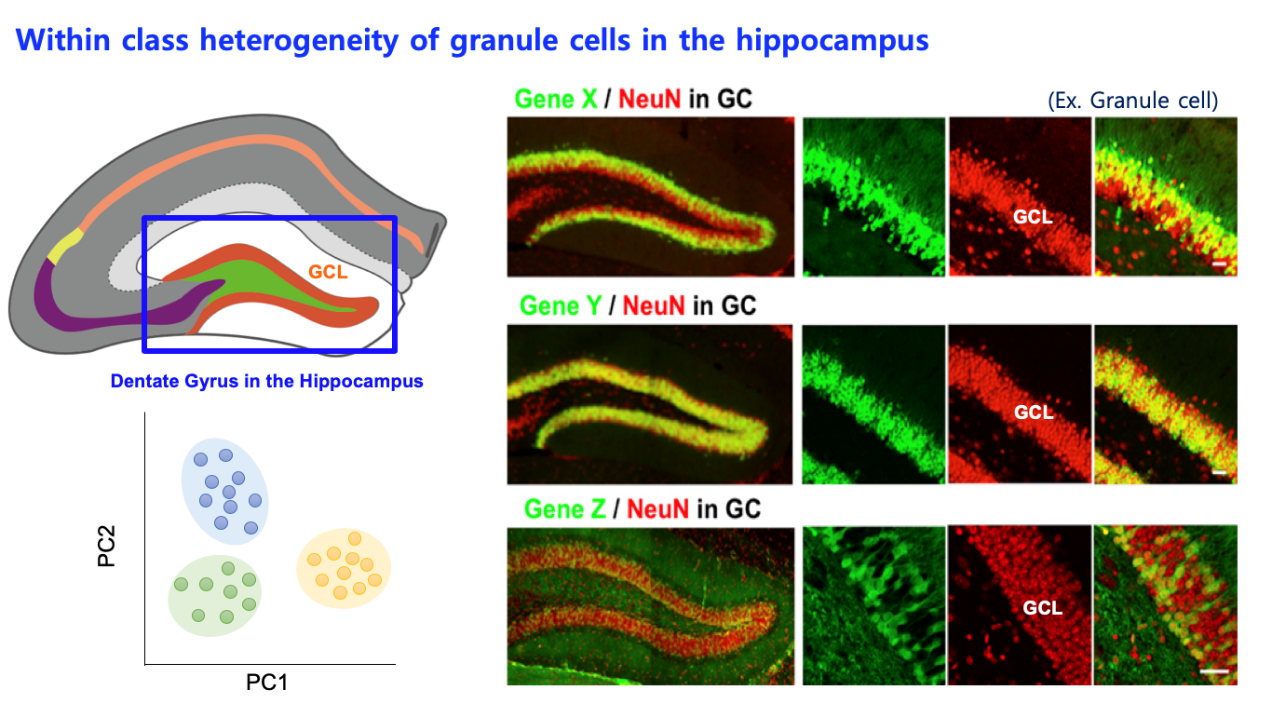